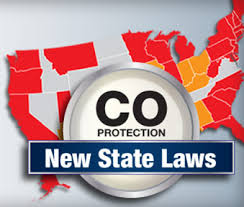 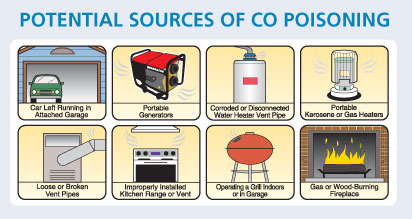 What Are Sources of Carbon Monoxide?


Carbon Monoxide Can Be Deadly You can't see or smell carbon monoxide, but at high levels it can kill a person in minutes. Carbon monoxide (CO) is produced whenever any fuel such as gas, oil, kerosene, wood, or charcoal is burned.

If appliances that burn fuel are maintained and used properly, the amount of CO produced is usually not hazardous.

However, if appliances are not working properly or are used incorrectly, dangerous levels of CO can result.

Be safe. Practice the DO's and DON'Ts of carbon monoxide. 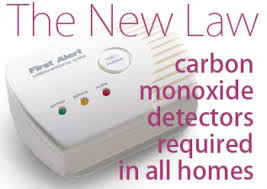 Know the symptoms of CO poisoning. At moderate levels, you or your family can get severe headaches, become dizzy, mentally confused, nauseated, or faint. You can even die if these levels persist for a long time.

Low levels can cause shortness of breath, mild nausea, and mild headaches, and may have longer-term effects on your health. Since many of these symptoms are similar to those of the flu, food poisoning, or other illnesses, you may not think that CO poisoning could be the cause.

Where Not to Install a CO Alarm


Some locations may interfere with the proper operation of the alarm and may cause false alarms or trouble signals.

should NOT be installed in the following locations:

Play it safe. If you experience symptoms that you think could be from CO poisoning:

Follow These Guidelines to Help Keep Your Family Safer

CO Prevention Do's and Do Not's